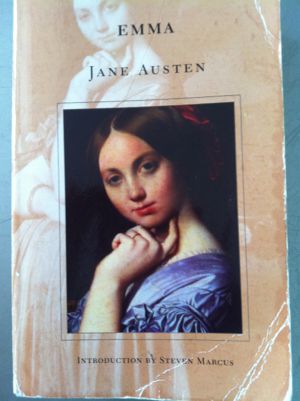 Rating: 4/5
Pages: 462
Well, this is actually both a read and a reread. The first time I ever read an Austen book on my own, without the instruction of a professor telling me to (my actual first Austen was Persuasion). I read it while on my trips to and from work and I fell in love with Mr. Knightley even while I thought she was destined for another. Those were agonizing pages to read.
I wasn't particularly fond of Frank Churchill, and while during my first read I didn't suspect him being engaged with Fairfax he acted odd. He was a little annoying, actually. I agreed with Knightley in his reasoning for Churchill's attitude and personality concerning his father.
To make a long story relatively short, Emma didn't really get good until the arrival of both Frank and Jane and, unfortunately, Mrs. Elton. The plot was simple and funny to as all of Emma's predictions fell through because of her meddling until finally it interfered with her own life--which personally was good so she could learn her lesson.
There is so much more to this book than the characters. There is the social commentary and satirical style of Austen and just the complexity and simplicity of the plot that is layered with intricate knots that amazingly by the end all becomes untied and tied into a neat bow but doesn't feel so forced. As if everything actually does have a place and they all end up where they're supposed to be.

Posted via LiveJournal app for iPhone.