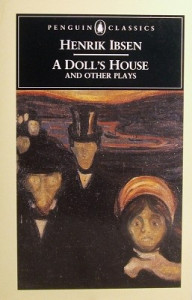 One of the most controversial plays in the history of theater, A Doll's House tells the story of Nora whose sacrifices to save her husband's life turn against her.

I was afraid that my knowledge of the iconic ending would spoil my enjoyment of it. But this play is far more than an unforgettable exit. From the very beginning, the character of Nora is absolutely fascinating. I was expecting her to be a highly moral and conventional housewife, who goes against her ethics solely to save her husband. Instead, Nora is a charming social butterfly, who likes to flirt and play, but never questions her love for her husband. As a result, he treats her like a little foolish animal or a child, incapable of having her own opinions.

A Doll's House may not be as powerful as Hedda Gabler, but it is still a must-read, and not just for the ending.