audrey_e at 19 The Time Traveler's Wife
19 THE TIME TRAVELER'S WIFE Audrey Niffenegger (US,2003) 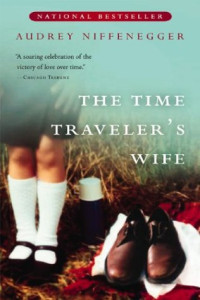 Henry and Clare have known that they're meant for each other for years. But Henry has a unique condition that makes him go back and forth through time against his will. As a result, he regularly disappears to find himself in dangerous situations.

For some reason, I did not realize this book would be the quality of a romance novel before I opened it. I had this idea that it would be well-written and intelligent. Not true.
The cliches about love made me cringe so many times that I'm sure the people who saw me on the train thought I was reading a Stephen King. The characters had no depth at all. Henry could time-travel, but he had no real personality. Clare was even less complex. As for all the family drama surrounding the couple, it was just as cliche as their romance itself. Between the grieving father who sees his dead wide in his son, and the rich family that hides a "terrible" secret, I must have rolled my eyes hundreds of times.
And the sad thing is that the author could've done something interesting with the plot. Instead, she goes the easy route. The reader is never with Henry when he's at his most vulnerable, that is to say when he has to fight for his life. Because that would've required more imagination and skills then the author seems to have.
And did I mention that there is a creepiness to the book that no one ever mentions. I'm surprised all the housewives who enjoyed this book did not mind the pedophilia.