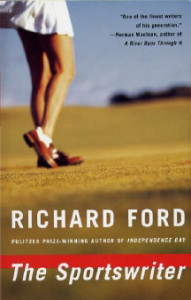 A week-end spent in Michigan with his girlfriend forces a middle-aged sportswriter to reflect on his life, and more specifically his failed marriage, the death of a son, his inability/unwillingness to write more fiction, and the state of his current relationship.

The Sportswriter is the first installment in the "Frank Bascombe trilogy", after the name of the main protagonist. The second installment, Independence Day, is the 1996 Pulitzer Prize winner.

The Sportswriter is one of those novels that focus on the life of average Americans, their work, family, expectations and disappointments. In other words, it should have been exactly my kind of novel. But the reality was different.
The entire novel is about the narrator reflecting on his own (average) life. My problem with this is not the format at all, but the execution. I don't think Richard Ford was as insightful in this novel as the self-indulgent format should have required. Ford's novel can easily be compared to the work of John Cheever, John Updike, Richard Yates or even Philip Roth. But these insightful writers usually know how to underline the tragedy that lies within everyday life, and leave the reader with a better understanding of it. In The Sportswriter, Ford simply could not match their talent, which makes the novel forgettable.
Another thing. While I was afraid that the subject of sports would be too overwhelming - I hate sports more than anything - I actually ended up thinking there were not enough discussions of the narrator's profession, and not enough powerful parallels between sports and the narrator's personality. I find this puzzling considering the title.
My hope is that Independence Day, which I intend to read eventually, shows a lot of improvements and is worthy of a Pulitzer Prize.