audrey_e at Book 45: The Tain
45 THE TAIN Anonymous/Translated by Ciaran Carson (Ireland) 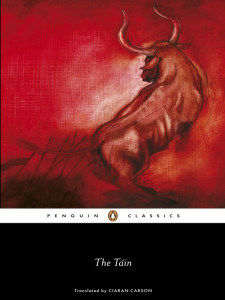 A pillow talk between Queen Medb and her husband King Ailill reveals to her that she does not own a bull that matches her husband's in value. She is determined to capture one of equal status by starting a war.

The Tain is mainly the story of Cu Chulainn, one of the most famous Irish heroes, his invincibility (this particular tale does not go as far as his death) and bad temper. Anyone interested in Celtic mythology would consider this piece a must-read, and those interested in Irish literature and history will easily see why Cu Chulainn became a symbol of resistance during the Irish Revolution.
The Tain is primarily a tale of military deeds, yet the magic that surrounds them is its most fascinating aspect, along with gender depiction through the ambitions and sexual power of the fascinating Queen Medb who regularly offers "the friendship of her thighs" to those who have something she covets.