47: Voyage au Bout de la Nuit / Journey to the End of the Night 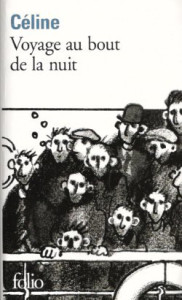 The life of Ferdinand Bardamu - an anti-hero and self-proclaimed coward - from his involvement in the Great War, to his life in the African colonies, his experience working for a Ford factory in the United States, and his return to France as a medical doctor in an asylum.

Céline's semi-autobiographical first novel is one of the most haunting texts I've ever read. His writing style combines slang with some deeply lyrical passages; the emotions are raw, disturbing, embarrassingly familiar.
The main character's experience of trench warfare is a trauma that sets the tone for the entire novel. Because of the great war, Bardamu is a pessimist, and yet his refusal to die, arguably despite the moral cost and the ugliness of life, is what pervades his journey; a journey that ultimately goes to the heart of human instincts.
Louis-Ferdinand Céline was no doubt a terrible human being, but this book is a must-read for anyone interested in 20th Century literary fiction. His work clearly influenced many of the great writers who came after him, such as Kurt Vonnegut and his Slaughterhouse-Five (the similarities between the two novels being very obvious).