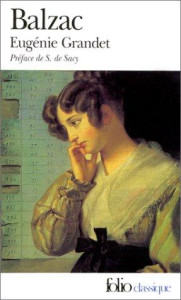 In the French countryside, the Grandet family lives in fear of the patriarch, a cunning miser, who forces his family to live in poverty despite his wealth, but the life of his daughter, the gentle Eugénie, changes the day her dashing cousin pays the family a fateful visit.

This is my first Balzac, and one of the many volumes in his series on French society during the Restoration called "The Human Comedy".
Eugénie Grandet's setting and mood is claustrophobic and grim in way that lingers with the reader long after he/she has finished reading the book. Its plot is straightforward and representative of its time, but one has to applaud Balzac for ensuring all his characters were complex enough to be realistic, even the good-hearted heroine.
This novel will no doubt resonate will all of those who have suffered from the anger of an authoritative patriarch.