The Redemption of Althalus by David and Leigh Eddings. 913 pages

This is pretty much a typical Eddings book.

Which is to say the prose is pedestrian (but could be worse), the plot is pretty much the same as all his other books, the dialogue is repetitive and rather clunky in places, and the stereotypes....Oh my, the stereotypes.

The female characters are universally condescending, controlling and manipulative and this is shown as a good thing. And all of them, without exception, up to and including any goddesses present, want, more than anything else in the world, to get married and have many, many children. Now I realise that many women do want this, and fair play to them, but it's not as universal as Eddings depicts it by a long way. And the way the male characters are depicted isn't really any better - they're mostly shown as basically little boys in adult bodies, who need a manipulative woman to make them behave.

And then there's the way that entire nations are depicted as having the same basic personality. I wouldn't go so far as to say that it's racist, as they're fictional nations and there's no mention of what colour any of them are, as far as I can tell, but it feels decidedly dodgy to me.

Now, by this point, you may well be asking why, if I feel this way about Eddings' books, I'm continuing to read them. I really wish I knew. It's like fast food, I think - I know it's bad for me, I know it's not going to be anything like as nice as the adverts, but sometimes I simply can't resist it.....

In the seventh book in the series, Pepper finds herself stuck using public transportation, which of course introduces her to her next mystery to solve. A free-spirited girl named Lucy was murdered in 1966 as she traveled home from a Beatles concert. Pepper is reluctant to solve the case until she learned that Lucy was the former babysitter of Pepper's boss Ella. As usual, though, Pepper finds herself dealing with a sticky situation, this time as Ella's wild child daughter steps in to help.

The last book in the series had kind of drooped, but I think this book definitely got back into the flow of what I enjoyed about the series. Pepper is as feisty as ever, and the situations she deals with keep you turning the pages. The addition of her partner may sound hokey, but it helped prevent staleness. I did solve the case pretty early on in the book (in the first act), but it didn't stop me from enjoying this book, which is why I give it a fun three and a half out of five red herrings.

After escaping from the Hostile Hospital, the Baudelaire orphans find themselves trapped in the trunk of their nemesis Count Olaf. The car takes them into the middle of nowhere where they stop at a carnival. Disguising themselves as circus freaks, the children continue working to solve the mystery of VFD and escape from Olaf's continuous presence.

While at the carnival, the children learn secrets that will bring them one step closer to the finale of the series and toward their destiny. But in usual Snicket fashion, the children deal with hopeless twists and turns throughout the story.

While Snicket's plotline is very predictable, the story still managed to pull me along. Enough new facts were peppered throughout the story to keep me interested and built up my anticipation toward reading the next book. The series continues to be fun and fascinating for readers, which is why I give it a great four out of five two-headed freaks.

I decided a few weeks back that it was time to revisit some of my favorite Christopher Moore books. I started with the book that introduced me to the author and his unique brand of gallows humor.

Jody is a woman with an average life...until she awakes one evening to find herself a vampire. Adjusting to her new lifestyle takes some time (and the realization that she'll never lose that five pounds she always wanted to), and she enlists the help of a minion, C. Thomas Flood. Flood's a niave 19-year-old from Indiana who works in a grocery store overnight, managing The Animals. Following behind Jody and Flood is the vampire who changed her, leaving dead bodies that point directly toward the two.

Moore is one of the greatest comedy writers. His way of telling a story with bizarre situations, a crazy cast of characters and brilliant wordplay, leave me hungry for Moore. In the case of this book, readers are given a fun story that is far greater than some of the schlocky vampire books we see today. If you want a fun vampire series that features non-sparkling, more realistic vampires, this is definitely the book series for you. And that is why I give this a super-strength four and half out of five minions. 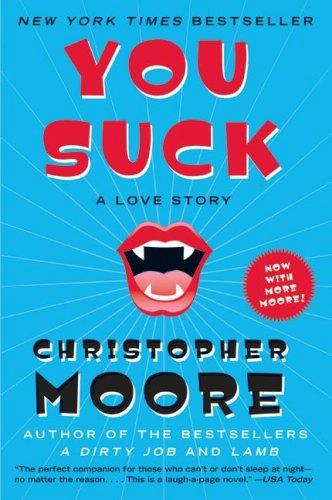 C. Thomas Flood thought he had it all - great job managing a grocery store with his buddies The Animals and a hot girlfriend who just happens to be a vampire. Until she turns him into a creature of the night as well. Now Tommy and Jody have to deal with life as a vampire couple, but they also need to work out just who their next minion will be. Enter Abby Normal, goth teen who is enamored with her new Dark Lord and Mistress.

But all isn't hunky dory in Tommy and Jody's lives. The Animals, back from blowing hundreds of thousands of dollars in Vegas have brought with them Blue, a blue prostitute who is hellbent on pursuing Jody and Tommy's new lifestyle. Also after them is the vampire who turned Jody.

Though it was written 12 years after the first novel, Moore definitely brings back the heart and soul of the first book. In my opinion, this book is even funnier than the first, and the situations he presents may seem outlandish but are totally fun. I also loved the brief cameo of Charlie Asher (see book #16). This book is definitely a fun and great read, totally worth five out of five Dark Lords.

Charlie Asher is the ultimate beta male. He's nervous, antsy and anxious that he's way out of his league. And after the death of his wife, when he becomes a grim reaper, he actually does find himself in such a situation. A newly single father, Charlie must raise his daughter and collect souls, with the help of his sister Jane, employees Lily (Abby Normal's best friend) and Ray and Minty Fresh (from Coyote Blue).

Complicating Charlie's soul collection are the Morrigan, three evil spirits who are also searching out the soul vessels to regain their power. As the Morrigan grow in power, the looming presence of the Illuminatus causes all hell to break loose...quite literally.

I absolutely love this book and the situation in which Charlie finds himself. The gallows humor is definitely strong in this book, leaving you giggling throughout. The only thing I didn't absolutely love was the ending. Sure, it's left open for further adventures of Charlie and his daughter, but it just feels so...abrupt I guess. It's a great book through, so don't let that stop you. I seriously believe this book is a nearly perfect four and half out of five Deaths.

If Demetri Martin's stand up comedy and TV show were turned into a book, this would be that book. Wait, not only is this that book but This is a Book.

Featuring short stories, sketches, one liners and other comedic writing, Martin pulls himself into the written world. I think that, because this book is nearly identical to what you've seen of him on TV, it does wear on the reader quite easily. I really enjoyed the sketches, but everything else got really old. Unfortunately, I found myself doing the one thing I don't ever want to do while reading a book: skimming. Even though the stories were all different, they still had a sameness about them that cause me to drift and just skim through to the end.

I really wanted to like this book, but in this case, I think Martin either needs to shake up his writing style or stick with TV and stand up. I wanted something new and different, but I didn't get that. Even some of the sketches are ones from his TV show. So while I wanted to give it a higher rating, I can only give this two out of five bits.

Nearly twenty years ago, John Calvino's family was slaughtered, the fourth family to be so by a sadistic killer. And even though Calvino managed the kill the man who murdered his family, murders are taking place that are mirroring the earlier killings. Calvino knows his family is a target, but he can't quite work out how murders can exactly mimic something that happened 20 years earlier by a man who was not able to share all of his secrets.

I will admit it, Dean Koontz's recent books had gotten really lackluster. The plots were unimaginative, the stories lacked suspense, and I seriously am sick to death of super smart kids and Golden Retrievers saving the day. While this book does feature super smart kids, they do have their faults (which helps builds the suspense), and the Golden Retriever is a ghost dog, which in this case, I'll allow. The story had some of the heart you found in older Koontz books. I didn't want to put it down, something I haven't said about Koontz in a while. Hallelujah!

Give this book a try. I'm curious if you find it as enjoyable as I did. I give it a good three out of five supernatural serial killers.