I got a bit of break yesterday at one hospital, and had a little lunch (late), and while gnawing on a tuna sandwich, I finished reading Osprey New Vanguard #176: Imperial Japanese Navy Heavy Cruisers 1941 – 45 which I found had good graphics, and was pretty informative. One of my first experience with gaming was when my cousins from Minnesota would visit for Thanksgiving, and they'd bring Midway, an Avalon Hill game. Among the vessels depicted were several Japanese heavy cruisers; I can still recall the names, and, yes, the book does discuss them in detail. One of those odd things that sticks with you for decades, what can I say...

Apparently there wasn't enough disorder in The Battle of the Crater as interpreted by historians Newt Gingrich and William R. Forstchen, so they took their historical novel so-titled and re-titled it as To Make Men Free.  Whatever.  The book takes its original title from an attempt by the Army of the Potomac to end the siege of Petersburg by undermining a critical fort and dropping it into a pit.  The new title probably refers to the prominent role of United States Colored Troops in preparing for the follow-on attack.

Book Review No. 15 will refer to the work as Battle, as it was by that title that I bought and read the hardback version.  I wonder if the book serves more as an allegory of Washington intrigue than as military history, no matter the title on the cover.  The usual maxim in military matters has a thousand fathers for victory, but the failure of the plan to drop the fort is clearly not an orphan: senior generals and senior engineers and more than a few quartermasters were involved.  I'm not conversant enough with the eastern campaigns to recommend a good analysis of the Battle of the Crater for comparison purposes.  Fortunately for the Union effort, the Confederacy was losing the war faster than the Federals could win it, with the failure at the Crater being followed almost immediately by the surrender of Atlanta.

So then, Offshore by Penelope Fitzgerald which won in 1979 was my latest Booker read. This is only the fourth Penelope Fitzgerald novel that I have read, and I have to say straight off – I enjoyed it enormously. A very busy weekend has forced me to read it slowly – which I am glad of as I have been able to savour it. It is after all a pretty short book.

A quote on the back cover of this edition caught my eye – so I must share it.

“Reading a Penelope Fitzgerald novel is like being taken for a ride in a peculiar kind of car. Everything is of top quality – the engine, the coachwork and the interior all fill you with confidence. Then after a mile or so, someone throws the steering-wheel out of the window”

A mixed group of people live on houseboats on the Thames at Battersea Reach in the early 1960’s. They are each temporarily lost, often eccentric and have come to belong and rely on one another. Willis, a naval artist who has never been to sea, is hoping to sell his boat The Dreadnought before she inevitably sinks. Richard an ex-navy man dominates the Reach as does his much larger boat, while his wife Laura hates the boats and frequently returns to her upper-middle class family. Richard and Laura are the only inhabitants of the Reach with any money. Maurice, a male prostitute, and receiver of stolen goods has become particularly good friends with Nenna, who abandoned by her husband is living on the boat Grace with her two daughters Martha and Tilda.

“During the small hours, tipsy Maurice became an oracle, ambiguous, wayward, but impressive. Evan his voice changed a little. He told the sombre truths of the light-hearted, betraying in a casual hour what was never intended to be shown. If the tide was low the two of them watched the gleams on the foreshore, at half tide they heard the water chuckling, waiting to lift the boats, at flood tide they saw the river as a powerful god, bearded with the white foam of detergents, calling home the twenty-seven lost rivers of London, sighing as the night declined.”

The two girls forage along the foreshore – and don’t always attend school.  They explore Battersea and Chelsea, but are more at home on the river. Six year old Tilda wonderfully old for her years is a spiky breath of fresh air.

“Tilda knew very well that the river could be dangerous. Although she had become a native of the boats, and pitied the tideless and ratless life of the Chelsea inhabitants, she respected the water and knew that one could die within sight of the Embankment.”

The characters relationships are altered by the changes in their circumstances, the world of this disparate little community is under threat. The reader senses this fragility of a way of life, from the very start. Fitzgerald perfectly pitches this beautiful little novel. The tidal flow of the river, the rise and fall of the boats, the mud along the river bank –  the interactions of her characters come together  to create a wonderful sense of time and place.

I have added these quotes from the book because I loved the Fitzgerald’s writing. The descriptions of the river are particularly good I think. This book is a real little gem. 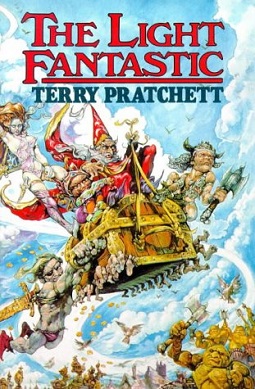 This book follows straight on from the first Discworld book, The Colour of Magic, so – based on the assumption that not everyone read that, the rest of this review is behind a spoiler cut.

The first book ended with Rincewind and Twoflower falling off the edge of the Discworld; however, because Rincewind has a spell in his brain, he is saved by magic, and what follows is another series of catastrophic misadventures as Rincewind tries to get back to Unseen University and get rid of the spell from his head. The book is very funny in places, and has the introduction of Cohen the Barbarian, and the librarian, who has been turned into an orang-utan.

Among the incidents in this book, my favourite is when Rincewind has to save Twoflower from the house of Death, where he meets all four horsemen of the apocalypse, and finds Twoflower teaching them Bridge, providing one of the funniest moments I have come across in any book. I actually noticed on this reading that there was a mention of Mort, Death’s apprentice, and the central character from the fourth book.

The climax is satisfying, with the final confrontation with the evil wizard Trymon and a finale that was made even more spectacular by its portrayal on Sky One’s version starring Sir David Jason and Sean Astin.

This was the first Discworld novel that I read, and it was good enough to convince me to read others, so is well worth a try – but I recommend starting with The Colour of Magic.