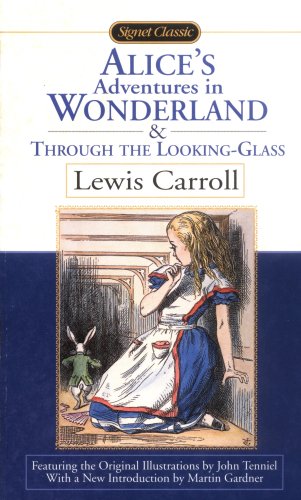 Title: Alice in Wonderland and Through the Looking Glass
Author: Lewis Carroll
My rating: 4/5
Summary from Amazon:
The young Alice follows a hasty hare underground-to come face-to-face with some of the strangest adventures in all of literature. In this arresting parody of the fears, anxieties, and complexities of growing up, readers enter the world of make-believe, where the impossible becomes possible and the heights of adventure are unlimited.

My thoughts:
I enjoyed reading these stories since I grew up with Alice. When I was small, I used to watch Disney's version of Alice in Wonderland till the VHS tape was broken. I don't know why but it took me this long to try and read the original literary version of this girl's journey to a very weird land of her imagination. I can understand most of the puns in the story but since I'm not a native British and most importantly not living at the same era of author, I can't follow several symbols or critics in the stories. Nevertheless, Alice is a curious girl indeed, I mean in normal world, her way of thinking is so jumbled up that people will think her strange I think. But she found her place in her Wonderland and obviously her visit there will always stay in her memory and heart to help her through the troubles of adolescence and adulthood. The stories even touched her elder sister who can imagine herself seeing all the wonders that Alice told her. I'm sure Carroll wanted his readers to hold onto bits and pieces of childhood imaginations to keep away the bitterness and sometimes cruelty of the real world and of growing up. To never forget that special child inside every one of us.

Sheriff Walt Longmire and his friend, Henry Standing Bear, leave Wyoming for a long weekend in Philadelphia. Henry has an invitation to lecture on his Mennonite pictures; Walt wants to visit his daughter, Cady. But not long after they arrive, Cady is brutally attacked and left in a coma. With help from Deputy Victoria Moretti’s family, Walt assists the investigation, unveiling a political cover-up. I missed the book not being in Absaroka County, but it was great to see the cop family that Vic comes from. I especially liked the designation of Vics in the family: Vic the Father, Vic the Son, and Vic the Holy Terror (our feisty deputy is called the Terror throughout the book). This series has not disappointed me yet, and I’ll be looking for the next book soon.

Lieutenant Eve Dallas is assigned to the strange death of a sidewalk sleeper (homeless man); his heart was removed surgically – a complicated procedure done without moving the man from his makeshift hovel. All the evidence suggests a well-trained surgeon as a suspect. As Dallas ties more murders fitting this pattern, and the local murders to a particular clinic, political pressure is placed for them to drop the investigation – the victims were considered insignificant for the resources being used. So when a policewoman who is harassing Eve with constant complaints turns up murdered, Dallas is asked to turn in her shield. But she still has a murderer to stop. I love the emphasis this novel had on the personal relationships between Eve and her husband and her team at work, how they all deal with each other to get over the obstacles and provide needed support while doing so. The futuristic aspect of this series (it’s the beginning of 2059) is so understated, but so essential to the story. It’s a wonderful balance of social science fiction and pure crime mystery.

This book starts out with a warning, the first of several letters from the terrorist group, Cassandra, promising destruction and targeting Lieutenant Eve Dallas as their worthy opponent in the upcoming destruction (that is, the person they are sending taunting letters to about the upcoming disasters). Dallas, however, doesn’t know what is about to come her way; she’s busy with the murder of a wealthy businessman. But when she’s lured to an abandoned warehouse moments before it is blown up, the game’s afoot. Eve’s hand-picked team struggles with sketchy clues, false leads (including one involving Officer Peabody’s little brother on his first visit to the big city), and relationship issues clouding things, leading to both Eve and her husband, Roarke (so rich he only has the one name), in a battle with Cassandra at the Statue of Liberty. This book was written before 9/11; one of the potential targets is the Twin Towers. Other known landmarks in New York City are blown up using hidden bombs throughout the structures, with innocents killed, so some who are sensitive may want to give this one a skip. I enjoyed the book, but I’m quite invested in the series by this point. Only another 20 or so books left in the series at this point!

1.  1.  Quest for Love:  True Stories of Passion and Purity by Elisabeth Elliot

2.  2.  Singled Out:  How Singles are Sterotyped, Stigmatized and Ignored and Still Live Happily Ever After by Beverly DePaulo This book goes into the common sterotypes that singles face and dispels them.  Though when it comes to getting government benefits including tax breaks single parents do get more benefits than do married couples.  There is a double standard with married moms and single moms when it comes to how their choices can be seen.  If a married woman whose husband is unemployed or underemployed decides to not work she is seen as standing up for her family however if a single woman decides not to work than she is seen as being lazy even if both of their families can not afford for mom to stay at home.  Though today there are businesses that do have employed spouses rule where if an employee's spouse is employed and qualify for benefits with their employer than they would have to get insurance trough their own employer and not through their spouses.  Now you may see a husband and children have health insurance while the wife does not have health insurance because the insurance at the wife's company is unaffordable for the wife.  Though there have been strides in equality for singles there is still a ways to go.

3.   3.  The Last Free Cat by Jon Blake  In the not so far into the future cats are only allowed to be owned by the very rich who purchase them through a company.  When a stray cat wanders into Jade's yard she decides that she wants to keep it no matter what the consequences are.  The enforcement officers raid Jade's house trying to get to Feela, the stray cat that Jade has taken into her house.  After Jade's mother's death she has to rely on Kris, the school troublemaker when they both go on the run trying to get Feela to safety.  Jade and Kris become closer to each other.  The beginning of the book is interesting with a futuristic society that has banned a popular household pet in order for a company to make a buck.  The middle part is interesting with Jade and Kris trying to get away from the reach of enforcement officers.  The end of the book is different than most science fiction stories and the story is not completely resolved though you do find out what does happen to the main characters in the book including Feela the cat.

6. 6.  War Is a Force That Gives Us Meaning by Chris Hedges    This book looks at the reality of war and how it has been treated through the ages.  It details the reasons that war does occur and at the tragic aftermath of war.  He details into the reasoning and myths behind war itself.  He also talks about drug abuse among veterans and how hard it is for them to integrate back into civilian life.  This book is a must read in order to understand how war is perceived and about the reality of war.

8. 8.  The Carrie Diaries by Candace Bushnell

9. 9.  I Heart Bloomberg by Melody Carlson

12.  The Eternity Code by Eoin Colfer This is the first book in the Artemis Fowl series that I have read.  Artemis has taken over his father's illegal activities in his father's absence to increase his family's wealth.  In his journal entries we learn that his father has become a changed man due to the recovery from his injury that he had received and realizes that family is more important than getting richer.  Unfortunately young Artemis has not learned this lesson and does increase his family's fortune.  He has made a cube from fairy technology that another wealthy man wants in order to increase his own riches.  When he successfully takes the cube, one of the fairies that he had worked with previously returns in order to help him to retrieve the cube back.  This book also has a dwarf who uses his own gas as a defense mechanism which would be appealing to the readers in this age category.  The main drawback is that the main character is a thirteen year old criminal mastermind who thinks that increasing his family's wealth is the most important thing even though he learns to appreciate those around him

One of Our Thursdays Is Missing by Jasper Fforde. 385 pages.
Sixth in the Thursday Next series.
There is turmoil in the BookWorld and top Jurisfiction agent Thursday Next is apparently missing. Enter the written Thursday, from the series of novels gjhost-written about the real Thursday's life. Is she enough like the real Thursday to unravel what's happened, or will the BookWorld be plunged into chaos and war?
Great fun, like all the Thursday novels and this one benefits from having a slightly different angle on things than the others, being written from the perspective of a rather different version of Thursday. Splendid stuff.

The Sleeping Beauty by CS Evans
The Thirteen Hallows by Michael Scott & Colette Freedman
Pemberley Ranch by Jack Caldwell
American Vampire #34 by Scott Snyder
For Whom the Belle Tolls by juju0268
And Again by Bad_Faery
So Many Ways to Reproduce edited by Caroline Fortin
The Weird Sisters by Eleanor Brown
Inked Magic by Jory Strong
Vampire Mistress by Joey W. Hill
The Walking Dead #17: Something to Fear by Robert Kirkman
Krampus the Yule Lord by Brom
Darcy and Fitzwilliam by Karen V. Wasylowski
Beauty Queens by Libba Bray
Beautiful Creatures by Kami Garcia & Margaret Stohl
Brave by PhoenixTalon
Strangely Alarming, The First Bite, A Flicker of Light, A Little Taste, and Caramel and Berries by Sapsorrow86