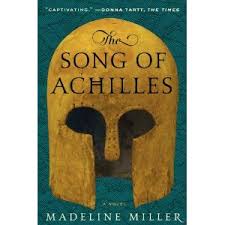 Title: The Song of Achilles

Summary: It is a retelling of parts from the Iliad from the point of view of Patroclus, a minor character in Homer’s epic. Patroclus, an exiled prince, was shipped to live and train as a soldier under another king. There he met prince Achilles; they become friends and fall in love. They train and grow up together before setting out on an adventure that will lead them to their epic tragic end at the walls of Troy.

Review: I would describe this novel as a guilty pleasure (and this is why this review was so difficult).

Some aspects of this novel were very simplistic, like the relationship between Achilles and Patroclus. Their interactions seemed shallow and, even after ten years being with each other every day at the walls of Troy, they didn’t seem to know each other better than when they were youths. There were also moments where it seemed like Miller was placing 21st century sexual standards on the ancient Greek society. Come on, the boys waiting until they were 16 to do more than just kiss once but yet all their friends the same age have been bedding girls for years? The reason given for their relationship not progressing quicker once they moved into the mountains wasn’t satisfactory. The characters seem like a shallow reflection of what they could have been. Patroclus couldn’t stop gushing about how perfect Achilles was, instead I would have expected him better than anyone to know his flaws but be forgiving. At least that was how I’ve viewed their relationship prior to reading this novel. Odysseus and other characters also seem without depths.

The relationship between Achilles and Patroclus is sweet; their devotion to each other is astonishing and makes the pain of loss the more painful. And this is also why it is a guilty pleasure. I liked this sweetness between them where most their complications came from the outside. This isn’t what I usually like but I still couldn’t help myself, their romance was just so adorable (and I will from now on deny ever writing those words even as they remain for eternity floating through the internet).

Miller is an amazing storyteller, great descriptions of battle scenes and political intrigue. However, there didn’t seem to be enough of those. Patroclus didn’t fight much and even when on the battlefield, he spent the majority of his time protected by Achilles (meaning he ended up watching Achilles fighting only).

Overall, this novel misses the mark to be regarded as the next Mary Renault (as some reviewers have heralded). Her words lack Renault’s poetry and story lacks the depth of characters and complexity. Renault build myth and relationships into an indistinguishable whole while Miller’s was a bit choppy, almost like two parallel stories instead of an interwoven one. But please don’t get me wrong, the story was beautiful, heart wrenching, and bittersweet (I cried even though I knew how it was going to end); the disagreements and politics between the kings presented beautifully. I will surely read anything else she writes gladly. It just lacked so much that made Renault phenomenal. A good book in its own right but please, no comparison to the greats.

Book 3 of Vatta's War. Ky has another encounter with the unpleasant Captain Furman from the first book, reaps the benefits of being kind to animals and tries to bring her idea of a united space force to life.

Another solid installment in this splendid space opera.

It's always model railroad season.  Baseball season approaches.  We honor those traditions with a Fifty Book Challenge doubleheader.  Leading off, Ian Stewart's Flatterland: like flatland, only more so.  It's written in such a way as to be funny, and some of the puns are groan-inducing.  Put those reservations aside and read the book, particularly if you're curious about the higher mathematics, or perhaps about cosmology. In the years since A. Square got into trouble with Flatland's authorities, Flatland's schools have adopted the concept of "cube" as the space-time representation of a square.  I suspect some kind of obelisk might make more sense (showing the infancy, puberty, and adulthood of the square), and there are still lots of unanswered questions about the way a space-time representation is truncated at death, but I digress.

There are descendants of A. Square, including one rebellious girl, who is able to communicate with the higher dimensions, and off she goes on a tour of assorted non-flat, non-Euclidean spaces, in which the properties one takes for granted on the plane derail your train of thought off the plane.  Some of the excursions explicitly refer to deeper cosmological possibilities, others are suggestive.  Consider residents of a hyperbolic-geometry platter who perceive their local surface as flat, and who must deal with a wind that shrinks objects as those objects approach what an external observer would call the edge of the platter.  The analogy to the singularity of a black hole ought to occur to the reader.

Cleaning up is Brian Greene's The Hidden Reality: Parallel Universes and the Deep Laws of the Cosmos, which frequently suggests taking a Flatland or Flatterland view of the reality we perceive and the realities we don't see.  In some places, Hidden Reality is intuitive, in others recondite.  It's useful, for example to know the symbols in common use in quantum physics before contemplating some of the equations.  That's frustrating for an economist catching up on some recreational reading on a plane ride.  On the other hand, it's encouraging for an economist to discover that duality in physics is also about the choice of variables with which one chooses to work a problem.  At page 309, "the perturbative vice becomes a calculational virtue."  There's a lot of analysis supporting the claim, but ultimately it's about describing a challenging empirical phenomenon in a straightforward way that can then be used to retrieve something that seems difficult to retrieve in another way.

More sobering, though, are those parts of Hidden Reality that conceive of universes being sucked into one black hole to provide material for new universes .  Should parallel universes not be parallel according to some geometry ...