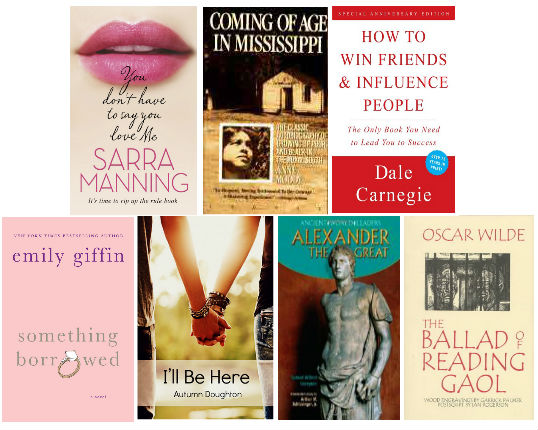 #6: You Don't Have to Say You Love Me -- by Sarra Manning [fiction, chick-lit, romance]
Summary: Sweet, bookish Neve Slater always plays by the rules...
Comment: This. Was. Amazing. The ending felt a lot bit rushed, but all in all it was a fantastic read. While the characters certainly had their faults, they were interesting and pretty well-rounded for the most part. I absolutely adored the relationship between the two main characters who were both so quirky in very different ways. I also adored the fact the book was for an adult audience and not, y'know, kiddies.

#7: Coming of Age in Mississippi -- by Anne Moody [non-fiction, autobiography, historical]
Summary: Born to a poor couple who were tenant farmers on a plantation in Mississippi, Anne Moody lived through some of the most dangerous days of the pre-civil rights era in the South...
Comment: This was really enjoyable. The author had a very strong voice and the the world illustrated through her eyes was both fascinating and terrible.

#8: How to Win Friends and Influence People -- by Dale Carnegie [non-fiction, self-help]
Summary: For more than sixty years the rock-solid, time-tested advice in this book has carried thousands of now famous people up the ladder of success in their business and personal lives.
Comment: This got really wordy at times and I thought the author used way too many anecdotes and examples to back his claims when just a few would have sufficed, but overall it was a decent read. Many of the points the author makes are pretty obvious, but he goes about explaining why they're so important in interesting ways, thought-provoking ways. There were also certain parts of the book that were really inspirational and moving, which, considering what type of book this is, is a good thing.

#9: Something Borrowed -- by Emily Giffin [fiction, romance, chick-lit]
Summary: Rachel has always been the consummate good girl---until her thirtieth birthday, when her best friend, Darcy, throws her a party. That night, after too many drinks, Rachel ends up in bed with Darcy's fiancé.
Comment: This was pretty good. I couldn't really sympathize with any of the characters (honestly, I thought all of them were jerks), but I finished this in a day so there was obviously something about it that kept me interested. Probably all the drama. Yeah, definitely all the drama. That, at least, was really well done. Um. I haven't read the sequel to this series, but I'm looking forward to it.

#10: I'll Be Here -- by Autumn Doughton [fiction, young adult, romance]
Summary: In short: Willow James' perfect boyfriend dumps her and she's left to pick up the pieces of a life she'd built around him.
Comment: This was pretty decent. It's your typical high-school romance, really, only with the bonus of the protagonist being tolerable. I don't really have much to say about this except that it made the ride to school and back interesting for the two days it took me to read this.

#11: Ancient World Leaders: Alexander the Great -- by Samuel Willard Crompton [non-fiction, biography, historical]
Summary: Describes the life and accomplishments of Alexander the Great of Macedonia.
Comment: My niece had to read this for school and when she was finished I started leafing through it, which somehow turned into actual reading. It's a short book (112 pages), but it's fascinating. It's also very well written for a book geared towards a younger audience (13+). Anyway, I totally got into the book despite myself. Waaay more than my niece did, actually.

#12: The Ballad of Reading Gaol -- by Oscar Wilde [non-fiction, poetry]
Summary: A poem by Oscar Wilde, written in exile either in Berneval or in Dieppe, France, after his release from Reading Gaol on or about 19 May 1897. Wilde had been incarcerated in Reading, after being convicted of homosexual offences in 1895 and sentenced to two years' hard labour in prison. (-Wiki)
Comment: This poem was long. It was also brilliant. I read it once, and then  a week later went back to read it again and found it to be just as riveting the second time around. It gets kind of purple-y at times, but the poem is beyond evocative and contains truly gorgeous imagery. Not to mention lines. I enjoyed this a lot.

Just how well can you ever know the person you love? This is the question that Nick Dunne must ask himself on the morning of his fifth wedding anniversary when his wife Amy suddenly disappears. The police immediately suspect Nick. Amy's friends reveal that she was afraid of him, that she kept secrets from him. He swears it isn't true. A police examination of his computer shows strange searches. He says they aren't his. And then there are the persistent calls on his mobile phone. So what really did happen to Nick's beautiful wife? And what was in that half-wrapped box left so casually on their marital bed? In this novel, marriage truly is the art of war... - synopsis from UK publisher's website.

This is a novel where it is advisable to avoid a detailed synopsis as a great deal of the tension is produced by the questions raised by the interplay between the points of view of Nick and Amy. Flynn's style is impressive as she interweaves narratives and time lines navigating the reader through the novel's many twists and turns. Aside from the thriller elements the novel also examines the dynamics of a marriage that from the outside looks perfect. As the UK cover blurb says "there are two sides to every story" and here the reader is given the opportunity to experience both.

I did find that it started off a little slow but then quickly gained pace and once it did I just had to finish it as quickly as I could in order to discover how things resolved. The Guardian's reviewer described Flynn as playing with her readers "with the finesse and delicacy of an expert angler" and I found this quite an apt description.

It was a fun thriller with some very chilling aspects. I certainly was impressed by it and felt it deserved the hype it was gaining. Unlike many in the thriller genre, this novel does invite re-reading in order to appreciate the foreshadowing of later events as well as the psychological elements. 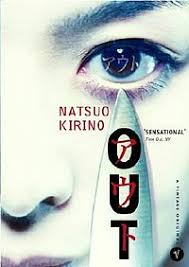 Summary: A man abuses his wife, the mother of his children and a night factory worker. One day he takes it too far and she kills him. Her “friends” are called to help her get rid of the body and hide the crime. But a body never stays hidden forever, especially when they become careless about keeping the secret.

Review: I thought I knew dark, and then I read Out. I thought very little shocked me anymore but this book managed to do just that, over and over again; murder, dismemberment (in this case cutting up the body into little pieces), rape… and then more of the same. Kirino wound a tale of how four housewives became caught up in the criminal underground of Japan, presented without any glamour or embellishments that the popular culture in the U.S. seems to be so fond of. Her descriptions were vivid and creative (and seemed realistic but since I’ve never dismembered-just so that we’re clear- a body it is just a guess), I actually had to put the book down a few times because it made me feel nauseous.

However, within the gruesome details existed a plot that was hard to put down. Will the police investigation uncover the truth? Or is something even more terrible than prison lurking behind the shadows? It is a tale of female image and identity in Japan, it is a tale of sinking into the depths of darkness of one’s soul, and it is a tale of trying to find oneself. The English translation was pretty good although I bet it missed some things from the original Japanese (books tend to do that in translation).

I really loved the novel… until the ending. Oh, how I hated (and I don’t use that word often) the ending. I guess it makes sense in a Stockholm Syndrome kind of way but I still didn’t like it, and that is all I am going to say as not to spoil. However, others may like the ending; it was dark, like the rest of the novel, and unexpected.
Collapse