Just before going to sleep last night I finally finished reading Jonathan Strange and Mr. Norell. I suppose you could call this one an alternate history novel, a very large book, set in the Napoleonic Era Britain, a world where magic can still be called up, and where fairies exist and can plague Man. Not exactly an easy read, and knowledge of the era helped a bit. I'd say it's worth reading, in any case.

After the events of Third Grave Dead Ahead, Charley Davidson, full-time Grim Reaper and part-time PI, has shut herself away in her apartment and been spending far too much time and money on various shopping channels. When a woman shows up at her door claiming someone is trying to kill her, it finally encourages Charlie to get dressed and back out there. Of course, there is still the matter of Reyes Farrow and a variety of demons determined to mess with her.

Another enjoyable outing for Charley D & Co. I was pleased to learn more about 'Grim Reapers' and other bits of back story. I liked the central mystery though sometimes the ongoing plot about demon attacks and Reyes threatened to bury it.

I did have to unearth my copy of Book #3 as I'd managed to forget a few points regarding how things had ended between Charley and her family after the climax of same. This reads like a fun mash-up of 'Supernatural' (demons possessing humans), 'Ghost Whisperer' (ghosts wandering about and often not knowing they are ghosts) and the Stephanie Plum novels (quick-talking, plucky lead with quirky side-kick, sassy elderly relation and hot blokes in attendance). Regarding the latter, I listened to some of this on audio and as I've been listening to Lorelei King's narration of the Plum novels for some months I made an immediate association.

The one thing that bothers me about the series is the constant - and I do mean constant references to Reyes' looks and 'hotness' not just from Charley but any female with a pulse. Seriously annoying after the first dozen or so remarks. I call this the 'Bella Swann' effect though maybe it is a tendency in romance literature of all kinds. Not only does it objectify men (and yes women have been subject to objectification but tit for tat not cool) but it also gives the impression that good looks is the only quality that women should consider in a mate. It's pretty shallow in print and in life. Still it is not enough of a niggle to stop me reading further instalments as I quite like Charley.

The question is, in the end: who will love, who will live, and who will be dead ever after? - tag line from UK publisher.

There are a lot of spoilers from earlier books in the official synopsis and I don't expect that anyone is going to start reading the series with the last ever Sookie Stackhouse novel. Suffice to say that Charlaine Harris uses Sookie's swan song to say goodbye not only to Sookie and main supporting cast but to have a variety of minor characters come to take a final bow. It isn't great literature but I've enjoyed the series since Book 1 and this one was no exception.

While I was happy with the series' outcome I seem to be in the minority as there has been enough outrage from a vocal group of fans to cause mainstream newspapers such as The Guardian and The Wall Street Journal to carry stories about it.

I have to say that I do prefer the US cover art designed by Lisa Desimini for this series as it is cute and quirky. 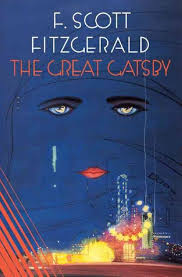 Summary: During the early 1920s, Nick moves to New York seeking to make big money on the booming Stock Market. He moves into a little shack next to a mansion owned by a mysterious man named Gatsby. Despite prohibition, Gatsby throws lavish parties filled with dancing and alcohol where everyone attends. After receiving an invitation to one of Gatsby’s parties, Nick gets pulled into the secret lives of those around him, finding out secrets that could ruin lives.

Review: I picked this novel up again (first time I read it for class in high school) so I could re-read it before seeing the 2013 movie in theatres.

It is hard to review a novel known as an American literary classic. People have written Masters’ thesis and Doctorate dissertations on it. Nothing I could possibly say would contribute anything new. The novel is extremely well written, the language is beautiful, and the story unfolds slowly as Fitzgerald uses his characters to provide social commentary on the superficiality and triviality of the lives of the rich in the 1920s.

The story is told from the point of view of Nick, Gatsby’s neighbor and Daisy’s cousin. He’s not one of the rich but an outsider looking into their world. Gatsby at first appears shallow, living a life of parties, drinking, and greedy attainment of vast amounts of money. Then we find out he did it all that for love. Yet, a part of me felt like he was more in love with the idea of Daisy and a life they could have had together rather than actually in love with Daisy herself.

With the exception of Nick and Gatsby, I actually hated all of the other characters, whatever their economic circumstances (they were all selfish and superficial). However, all characters, even Gatsby and Nick, seemed to have the emotional maturity of teenagers. It was still a good book but I just couldn’t shake the thought that every reaction to the events and each other reflected the maturity of someone at 15 but seemed ridiculous at 30. At the end I still felt awful for Gatsby and hated them all (except Nick) even more.

Overall, the prose is astonishing, the plot simple enough (although poignant), and the characters generally emotionally impaired. I felt like the descriptions transformed me right back into the 1920s. It was a good novel, but reading it twice in a lifetime is more than enough.

Movie Note: I saw the 2013 production of The Great Gatsby movie and it was amazing. The visual style was edgy, taking the 1920s and mixing it up with modern aesthetic. The story stayed mostly true to the book, aside from some slight additions and omissions, and carried over to marvelously to the big screen. Actually, I liked the movie better than the book (*gasp*, I know, I never expect the movie to be better than the book).
Collapse