Game convention weekend; there's a booth there heavily stocked with Ospreys, and I plowed right into them:

First one I finished was Osprey Elite #187: Byzantine Imperial Guardsmen 925 1025: The Taghmata and Imperial Guard. I'm not well-versed in Byzantine history, so this one I found pretty interesting.

Then, Osprey Fortress #79: Israeli Fortifications of the October War 1973. The Israelis couldn't really afford to keep heavy concentrations of troops on the Suez Canal, so they built fortifications, but the Egyptians came up with ways to circumvent them and it led to their successes in the Yom Kippur War. Interesting read.

Next was Osprey Warrior #103: Macedonian Warrior: Alexander’s Elite Infantryman, a discussion of the soldiers who marched from Europe deep into Asia. Heck, they were the only army to defeat the Afghan tribes! Another piece of work with loads of information.

Then this morning I finished reading Osprey New Vanguard #196: Warships of the Ancient World 3000 – 500 BC; considering that they have so little data about the most ancient navies, the book gives pretty good detail about what has been deduced. Nice.

I think I may get a few more today... 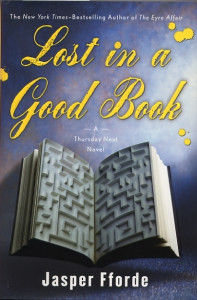 This is the second novel in the Thursday Next series. This time Thursday deals with her husband's disappearance and jumps into  books such as Great Expectations, "The Raven", Alice in Wonderland and The Trial.

There is a definite improvement from the first in the series. The plot is less confusing and there is a greater use of "book jumping", which is what makes Fforde's novels potentially exciting. The scenes with The Trial were the funniest by far because they really captured the nonsensicality of the original novel.
However, everything that happened outside the books was not engaging enough for me to feel that I have to keep on reading. More importantly, the re-use of classic literary characters was not always creative. The scenes with Miss Havisham, for example, were repetitive.

Jasper Fforde's novels remind me of Neil Gaiman's in the sense that I love their ideas, but always find myself disappointed because they do not go as far with them as I want them to.  And what are great ideas for if the execution is lacking?

It's the year 2044, and the real world has become an ugly place. We're out of oil. We've wrecked the climate. Famine, poverty, and disease are widespread. like most of humanity, Wade Watts escapes this depressing reality by spending his waking hours jacked into the OASIS, a sprawling virtual utopia where you can be anything you want to be, where you can live and play and fall in love on any of ten thousand planets. And like most of humanity, Wade is obsessed by the ultimate lottery ticket that lies concealed within this alternate reality: OASIS founder James Halliday, who dies with no heir, has promised that control of the OASIS - and his massive fortune - will go to the person who can solve the riddles he has left scattered throughout his creation.

For years, millions have struggled fruitlessly to attain this prize, knowing only that the riddles are based in the culture of the late twentieth century. And then Wade stumbles onto the key to the first puzzle.Suddenly, he finds himself pitted against thousands of competitors in a desperate race to claim the ultimate prize, a chase that soon takes on terrifying real-world dimensions - and that will leave both Wade and his world profoundly changed. - synopsis from UK publisher's website.

Just an amazing novel that I loved from its opening. While I am not a huge gamer these days I have a great fondness for 1980s culture in general and recall those early computer games that this novel honours. Cline does a great job of world building with the dystopian world three decades hence and its virtual reality that develops current trends. It feels a very plausible future in terms of dwindling resources and other factors including an increasing gap between the haves and the have-nots.

This was a selection for one of my reading groups and was one of those rare novels that gained an enthusiastic thumbs up from everyone in the group, including those who are not into science fiction, demonstrating that it has a broad appeal. My own copy had the top cover but I was rather envious of the more retro cover shown underneath as it features 'Space Invaders', a classic arcade game that I loved and played day after day during jolly pub lunch hours in the early 80s.

I enjoyed the novel so much that both read its print edition and then listened to its audio book skilfully narrated by Wil Wheaton.

Ready Player One Website - contains links to excerpts from book and audiobook and other goodies.
Collapse