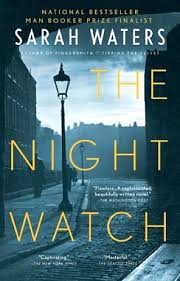 Summary: Helen, Viv, Duncan, and Kay survive through the horrors of London torn apart by World War II as their lives connect and diverge. (You’d think there was more to the plot but no, not really).

Review: Overall, I enjoyed this book. It was built with an interesting structure where the first part occurred in 1947 (this part was slow and a bit tedious to read), the second in 1944, and the third in 1941 (wish we’d spent more time here, it was only about 40 pages long). The structure worked for this novel, and even though we knew the future I guessed some of the ending-beginnings (uhh) but not all (and was even very much surprised by one of them). I think the structure also contributed to the overall gloomy mood of the novel as we knew that the end of the war didn’t mean a happily ever after for the characters (but I guess that’s life, right?).

In general, the problem (or strength) with character driven novels is that it requires the readers to connect or empathize with the characters (or at least not be annoyed or frustrated by them). I felt differently about each character which gave this novel an edge over Waters’ Tipping the Velvet where Nancy just completely annoyed me right from the start.

I didn’t like Helen at all; she is one of those girls who can never be happy and when things are going well make up their own drama to fill the void. In that respect she is very similar to Nancy from Tipping the Velvet, and if it wasn’t for the other characters I would have abandoned reading this book.

At the same time, I was conflicted about Viv. I did like her; she was most interesting in 1944 where she faced with difficult challenges but it frustrated me to watch her go through so much knowing that everything that happens (knowing this because of the peek into 1947) elicited no change or growth on her part.

My favorite part of the plot was the mystery surrounding Duncan; it kept me wanting to turn the page. We find out early on in 1947 that he spent time in jail. I made various guesses about why he ended up there and was still completely shocked at just how wrong I was. I was also entirely in tears reading Duncan’s 1941 part of the story.

Lastly, I loved Kay. She was strong, assertive, kind, heroic, and loving but not without faults (which I found even more endearing). She didn’t seem interesting in 1947 but as more of her story was exposed, the more I understood her and how she ended up emotionally in that place, the more I connected with her. I think her character development was done brilliantly and every moment back into the past was like peeling back another one of her layers.

The descriptions were amazing and vivid and lyrical, making the different era come alive. Instead of presenting a romanticized view of the war, she described the horror and violence superbly. I just wish that when developing characters, Waters would write more Kays and less Nancies/Helens.

Fourteen-year old Sylvie has been hospitalised in London with extreme allergies that appear to be a reaction to the modern world. One of her doctors, Hazel, suggests to Sylvie and her mother Miranda that the girl might benefit from a stay at the alternative community where Hazel was born and raised. Stonewylde is located in a remote area on the Dorset coast and is enclosed behind high boundary walls. Hazel believes that the clean air and green lifestyle practised there could help Sylvie. She introduces them to Magus, the charismatic leader of Stonewylde, and soon mother and daughter are settling in to the community. It all seems very idyllic and Sylvie soon begins to regain her health. Yul, a moody Village boy, is sent to work on their garden as punishment for being rebellious and Sylvie is curious about him. As their forbidden friendship grows she comes to realise that not all is what it seems at Stonewylde.

For a number of years I have heard positive things about Kit Berry's Stonewylde series from various friends in the Pagan community. Then I met Kit at a Pagan Federation Conference in London where she was selling copies of the recently revised editions of the first three books. Kit had initially self-published these and built up a loyal following. Orion Books under their SF/F imprint Gollancz bought the worldwide rights and also commissioned two further books to complete the cycle. We had a nice chat and I bought copies of the first two to get me started.

Just from reading the first book I can certainly appreciate why folk are so passionate about the series. It is a very down to earth style of fantasy and the magic depicted within is linked to the natural world as are the festivals celebrated by the community to honour the Earth Goddess and the Wheel of the Year.

Still it isn't all sweetness and light and the novel does contain some disturbing elements including quite brutal treatment of one of its protagonists. It is testimony to the power of the story that I longed for someone to contact Social Services. As in many cults, even the Pagan/Earth Magic kind proposed here, an iron grip is maintained upon the members so they submit to deeply unfair treatment out of fear of exclusion. I found it a thrilling and moving story that ended on an interesting cliffhanger and I must find out what happens next.

The cover art is beautifully produced and certainly conveys the essence of the novel's themes of ancient magic and nature.

Official Stonewylde site - contains material about the books as well as Kit's writings on the Green Magic that informs the series.
Collapse