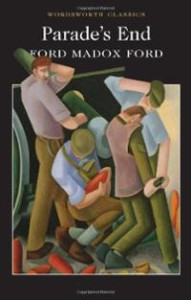 The life of Christopher Tietjens, which devastatingly culminates with the Great War, as he struggles with his increasingly obsolete values, an unfaithful wife and a doomed love affair.

Parade's End is a tetralogy comprised of Some Do Not..., No More Parades, A Man Could Stand Up -- and Last Post.

This is the hardest book review I've had to write this year, and interestingly enough the last one.
I'm not sure how I feel about this book because some parts were absolutely amazing, while the whole tetralogy was overly long and difficult to get through. At times, it felt as if Ford was trying too hard to write a modernist novel, and yet he is sometimes so successful, that one is reluctant to blame him for polishing his modernist skills.
Parade's End's action is told through the consciousness of its characters; characters who constantly obsess over specific events or ideas. Their obsessions change with time, and become less and less mundane as the war and the trenches make their appearance. A Man Could Stand Up --, the third volume and the best, includes some of the most vivid and haunting accounts of trench warfare I've ever read.
Ford also messes with the chronology, so the narratives constantly goes back and forth in time. While it makes the plot challenging to follow when it focuses on the mundane lives of the English aristocracy, these jumps make perfect sense in the context of the war, when a soldier is unable to let go of what he has seen and heard.
Overall, Parade's End is an extremely challenging read, sometimes to the level of Faulkner's work, and I truly feel that Some Do Not... and Last Post (the first and the last volumes) were not as compelling as they should've been. Yet the best moments in the second and third books make the whole tetralogy worth the read.

I'll be cutting it close to get to 50 this year, but my last book is in progress. I'll post my full list for 2013 and some year-end wrap-up thoughts in a day or two.

Book #47 was "Whiter than Snow" by Sandra Dallas. I'd read another book by the author, "The Persian Pickle Club," a few years ago and enjoyed it, so when my mother offered to lend me this one, I figured I'd give it a go. Dallas is a former journalist, and I can tell that she still has some of those writing skills in her and that she probably gets her ideas from news items, and likely from local history since she's also written some non-fiction books on Colorado history. The book is about a small town in Colorado where an avalanche comes down on 9 schoolchildren returning home at the end of the day. Only a few of them survive. The story flashes back to tell the stories of the families who are all caught up in the rescue effort, and shows how nobody, from the lowliest to the highest of society, is without sin (or "whiter than snow"). I didn't think it was perfect - I find her writing a little clunky in a few places. However, overall, I really enjoyed the book very much.

Book #48 was "Still Life with Woodpecker" by Tom Robbins. I've read several other things by this author, and his "Jitterbug Perfume" is still one of my all-time favorite reads, so I thought I'd give this a try when I was able to get it for 10 cents at a rummage sale. I had a little trouble getting into the book because of Robbins' style - the novel is sort of a fractured fairytale romance between an exiled princess and an outlaw bomber. As per usual, Robbins also explores some societal trends and ideas in his uniquely ridiculous way. I'm not sure if this book was more preposterous than other books I've read by him or if my taste in literature has changed over time, but this wasn't my favorite from the author. I also picked up "Skinny Legs and All" for 10 cents at the same rummage sale and plan to re-read that in 2014.

After the aristocratic twins adventures in the Colonies (how they refer to the United States), it had seemed as though the financial troubles of Tawcester Towers were in the past. Yet they and the Dowager Duchess learn that from their financial advisor that the Stockmarket Crash has left their investments as worthless. The Dowager Duchess decides that an inventory must be taken of family possessions with the hope they can sell some of it off. Blotto and Twinks assist in the task by rooting among the contents of the attics. They come across a cache of Egyptian artefacts collected by the tenth duke, Rupert the Egyptologist and this find creates some excitement in the valuer.

The prize of the collection is a sarcophagus decorated with hieroglyphs. Twinks begins to translate them: 'Anyone who desecrates this shrine will be visited by the Pharaohs curse...' . As this last bit is translated she and Blotto are concerned to see that their trusty chauffeur Corky Froggett had already lifted the lid. They laugh off the idea of a curse but then a series of unpleasant incidents start occurring at Tawcester Towers with Corky Froggett as their focus. Twinks discovers that the only way to lift the curse is to return the sarcophagus to the Valley of the Kings. Thus, with the sarcophagus stowed in a secret compartment in Blotto's beloved Lagonda the twins sneak away from Tawcester Towers, well aware that the Dowager Duchess is going to be very cross that they have removed the valuable artefact that was intended to restore the family's fortunes. Accompanied by Corky Froggett they embark on a new adventure and of course deal with a variety of stenchers along the way.

I am always very enthusiastic to get my hands of the latest adventures of Blotto and Twinks as I know I am in for a few hours of great fun. Brett's style in this series is not subtle; the humour is very broad with the main focus of the satire being the snobbery and prejudices of the upper class twits Blotto and Twinks. Still no one is safe from being poked fun at in these pages, which is what makes them so delightful.

I adore Simon Brett's reading of his own work and so listened to the audio book as well as read the print edition. He does such a great job with the various characters causing me to laugh out loud. However, I did note that whoever is designing the cover art for the ISIS audio editions seem not to have realised that Twinks is a blonde. Here is hoping that Brett will continue to write more of their adventures.

“Who Dares Enter the Funhouse of Fear?” - cover tag line.

The novel is narrated by Devin Jones, a writer now in his sixties, who is looking back on the pivotal events of the summer of 1973 when he took a summer job at Joyland, an amusement park in Heaven's Bay, North Carolina, hoping to forget the girl who had broken his heart. While learning the Talk, the colourful lingo of the carnival folk, he also hears of a vicious murder of a young woman that had taken place on the Haunted House ride some years before. Her ghost is said to haunt the ride. Devin's curiosity leads him to seek answers about the murder and also to become involved in the fate of a dying child.

I found this an excellent short novel by King, which is as much a poignant memoir about a young man's coming of age as it is about the haunted ride. It has the strong story-telling and down-to-earth characterisations that are the hallmarks of King's writing. While quite understated in its crime/thriller elements it still delivered a nail-biting climax . I feel that it would make an excellent film.

The retro cover art is a delight in itself evoking the pulp fiction covers of the 1950s.

Here ends my 2013 challenge and it has been a personal best with 237 books, which has amounted to 76,218 pages and quite a few hours of audiobooks.