Among the various things I got done yesterday was to finish another novel by Paul Doherty, this one being The Midnight Man. It took me a long time to complete, and several times I thought about quitting it, because though this WAS a mystery novel, it spent most of its time dabbling in horror and occult, and it just wasn't my cup of tea. It's another in the author's series of books ostensibly tales told by the pilgrims of Chaucer's book. Not my favorite by this author.

Young Isabella is barely a teenager when she is thrust into danger. Suspected of treason and held captive, she treads a perilous path, until, at age seventeen, she finds herself heiress of Castile, the largest kingdom in Spain. Plunged into a deadly conflict to secure her crown, she is determined to wed the one man whom she has vowed to love yet is forbidden to her—Fernando, prince of Aragón.

As together they unite their two realms under "one crown, one country, one faith," Isabella and Fernando face an impoverished Spain beset by enemies. With the future of her throne at stake, Isabella resists the zealous demands of the inquisitor, Torquemada, even as she is seduced by the dreams of an enigmatic navigator named Columbus. But when a violent, treacherous battle against an ancient adversary erupts, it will test Isabella’s resolve, her courage, and her tenacious belief in her destiny . . . - synopsis from author's website.

Having been captivated by Sky Arts showing of the first season of the Spanish historical drama 'Isabel' about the early life of Queen Isabel I was keen to read this novel. Right from the start the characters feel familiar thanks to the programme and I was easily able to keep track of them.

Gortner obviously is very passionate about this subject and that shows in every page of this outstanding work of historical fiction. He especially takes pains to portray the contradictions in Isabel's character and her controversial legacy to the history. He piqued my interest as much as the TV series had done to learn more about this fascinating period of European history. I likely will read his earlier novel about Isabel's daughter Juana, The Last Queen.

C. W. Gortner's page on 'The Queen's Vow' - contains downloadable excerpt and background from Gortner on the novel.

5) How To Tell If Your Cat Is Plotting To Kill You. The Oatmeal/Matthew Inman. 2012. Highlights of The Oatmeal webcomic focusing on catty behaviour. Not for paranoid cat owners.

6) The Magic Three of Solatia by Jane Yolen. 1974. An old folkloric fantasy novel in four parts with wonderful language, atmosphere, and themes. The author does make the general themes of magic and it's consequences very true to the setting of the story. Well worth finding and reading.

The Third Doctor and Jo Grant are trying to track down the magical spear of Odin when they find themselves caught up in a vicious battle between two Viking tribes. But one of the Vikings is even more dangerous than he appears to be. Can the Doctor stop the spear getting into the wrong hands before it's too late? - synopsis from BBC Doctor Who official site.

I loved this short story of the Third Doctor's adventures with Jo Grant and their trip back in time to early Viking times. I am already an admirer of Marcus Sedgwick's writing and I felt that he captured the feel of the Third Doctor. This was a pleasurable romp. 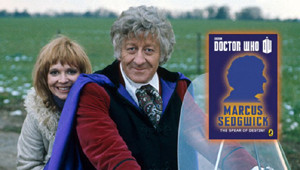 The Third Doctor and Jo Grant

When the Fourth Doctor takes Leela to visit an immense tree space station known as the Heligan Structure, little do they know that the tree has been asleep for centuries, dreaming of vengeance against a man in a blue box... As the tree awakes, the Time Lord and his companion soon discover why they are such unwelcome guests. synopsis from BBC Doctor Who official site.

Tom Baker's Doctor was my first and has remained my favourite Doctor from the classic era. This was a fun short story that proved very exciting and demonstrates how much can be packed into a few pages. This series produced by Puffin seems an excellent introduction to the many faces of The Doctor for young readers as well as older fans. 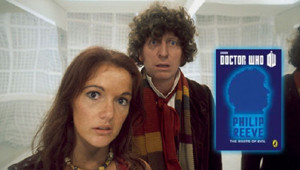 The Fourth Doctor and Leela

13 Little Blue Envelopes - Maureen Johnson
Blurb: If your free-spirited aunt left you 13 little blue envelopes: Would you follow the directions? Would you travel around the world? Would you open the envelopes one by one? Inside envelope 1 is money and instructions to buy a plane ticket. Inside envelope 2 are directions to a specific London flat. Inside envelope 3 tells Ginny: Find a starving artist. Because of envelope 4, Ginny and a playwright/theif/man-about-town called Keith go to Scotland together, with disastrous - though really romantic - results. But will she ever see him again? Everything about Ginny will change this summer, and it's all because of the 13 little blue envelopes...
My thoughts: This book was an easy read and I got through it in three days. The story was enjoyable, if not entirely believable and I feel the plot could've likely been developed further. While the book was fundamentally good, I had a number of issues with it. Firstly, the book had a range of British characters, few of whom actually used words and phrases we would say (e.g. 'ladybugs' instead of 'ladybirds', 'pants' instead of 'knickers'). While this seems minor, it is an irritating habit I have seen in a lot of books. Another issue I had was a failure to fact check - you don't need to marry someone in the UK for health insurance, Copenhagen does not have "midnight sun" and it is near impossible to get to Edinburgh from London in four hours on a British train system. These issues spoiled the book for me, as they just kept occurring. Overall an OK read, but too many issues to make it worthwhile.
Collapse