Kate Baron is a single mother with a demanding career as a junior partner in a prestigious law firm. An important meeting is interrupted by a call from St. Grace, the exclusive prep school that her 15-year old daughter Amelia attends. Karen is shocked to hear that her daughter has been suspended for cheating on an English paper. She makes her way across town to collect Amelia though delays mean that she arrives over an hour late to find the police and ambulances outside the school. In horror she discovers that her daughter is dead; that she jumped off the roof in what appears to be an act of spontaneous suicide. Kate naturally is plunged into deep grief unable to accept that her daughter would kill herself. However, when she receives an anonymous text claiming that Amelia did not jump she begins to investigate her daughter's life via her texts and on-line life and uncovers disturbing truths.

First of all my thanks to Simon & Schuster for providing me a copy of the paperback to review. I discovered very quickly that this was one of those novels that proved almost impossible to put down as Kate seeks to understand the circumstances of her daughter's death and come to terms with her grief. The narrative moves between this investigation and Amelia's own account of the weeks preceding her death. This way of telling the story was very clever as revealing the events in this way highlighted the darker side of Amelia's life at the school and how even a strong relationship between a parent and child can be undermined by outside influences.

It is a hard book to classify in terms of genre. It is to some extent a coming-of-age story though one with a tragic ending. I felt a great deal of empathy for Kate as the subject of suicide hit close to home for me, making some aspects of the story difficult to read. The kind of stress Amelia was under certainly placed my own experiences as a child and teenager into perspective or indicated that the world has become a much harsher place to be young. So top marks for this novel and it is one I shall certainly recommend to others.

Atticus Grammaticus Cattypuss Claw, the world's greatest REFORMED cat burglar returns in his most thrilling adventure yet! When an ancient book of Egyptian hieroglyphs showing the way to the Lost City of Cats is stolen from the British Museum, Atticus - newly promoted to Police Cat Sergeant - discovers that only HE has the power to trace it.  In a race against time, Atticus and his friends must battle across the hostile desert after the robbers. Can Atticus solve the mystery of the Lost City and beat his old enemies Klob, Biscuit and the magpies to the Cat Pharaoh's treasure? The tabby with cat-titude faces the toughest test of his nine lives as a brush with history forces him to choose where his ultimate destiny lies. - synopsis from UK publisher's website.

The third in this charming series that has been written for children but is sure to delight cat lovers of all ages. Here Atticus learns more about his background and even his previous lives!

As the cover and synopsis indicates this adventure is partly set in Egypt and Bastet gets a mention. There was some very funny laugh out loud sections and I did read a few passages aloud to my cats who were sitting with me while I was reading. I think they approve of Atticus even if they are not tabbies. Again I was a little surprised that the illustrations of Atticus' nemesis Ginger Biscuit, who is always described as a ginger cat, is shown as a black cat. Black cats are cool!

Two hundred years ago two brothers, Jacob and Wilhelm, collected together a large selection of folk and fairy tales and published them as 'Kinder- und Hausmärchen' (Children’s and Household Tales). So successful was the first collection of 88 stories that they kept adding more to subsequent editions. Since then, the tales of the Brothers Grimm have been translated into upwards of a hundred different languages and are known and loved throughout the world. Now award-winning editor Stephen Jones has tasked some of the brightest and best horror writers in Britain, America and Europe with reinterpreting some of the traditional Hausmärchen, putting a decidedly darker spin on the classic stories. - synopsis from UK publisher's website.

Stephen Jones' Introduction sets the scene giving some background on the Grimm tales and how the anthology was conceived. He also noted the recent interest in the darker side of the Grimm tales as expressed in the TV series Once Upon a Time and Grimm and films such as Hansel and Gretel: Witch-Hunters.

Most of the stories stood out for me and provided some genuinely hair-raising and gruesome moments. Only one story fell flat for me. The Grimm stories included reminded me of the power of the source material.

Alan Lee's black and white illustrations sprinkled throughout the text were brilliant with special mention for his haunting cover painting.

Every year for ten years, a young woman's body was found in Edinburgh at Christmas time: naked, throat slit, body washed clean. ... The final victim, Kirsty Summers, was Detective Constable Tony McLean's fiancée. But the Christmas Killer made a mistake. In a cellar under a shop, McLean found a torture chamber and put an end to the brutal killing spree.

Twelve years later, and a fellow prisoner has just murdered the incarcerated Christmas Killer. But with the arrival of the festive season comes a body. A young woman: naked, washed, her throat cut. Is this a copycat killer? Was the wrong man behind bars all this time? Or is there a more sinister, frightening explanation? McLean must revisit the most disturbing case of his life and discover what he missed before the killer strikes again . . . - synopsis from UK publisher's website.

Another strong outing for Inspector McLean. The supernatural elements were not quite as obvious as in the first yet still present. The old case sheds light on a personal tragedy for McLean, which explains why despite his relative youth and good looks he is so wary of personal relationships.

I am a little surprised that Oswald is being hailed as the 'new Ian Rankin' given the occult aspects of the plots to date. Still the stories are set in Scotland and are very gritty, which may account for the comparison. I found this very hard to put down and have pre-ordered Book 3 due out later this month. 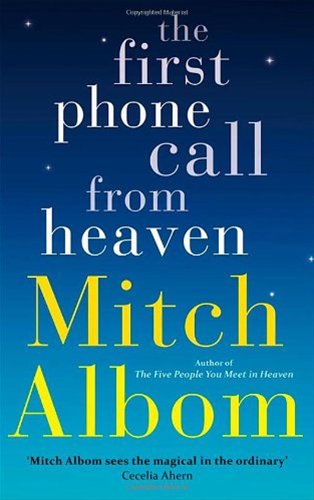 The First Phone Call from Heaven tells the story of a small town on Lake Michigan that gets worldwide attention when its citizens start receiving phone calls from the afterlife. Is it the greatest miracle ever or a massive hoax? Sully Harding, a grief-stricken single father, is determined to find out. An allegory about the power of belief--and a page-turner that will touch your soul--Albom's masterful storytelling has never been so moving and unexpected.

Readers of The Five People You Meet in Heaven will recognize the warmth and emotion so redolent of Albom's writing, and those who haven't yet enjoyed the power of his storytelling, will thrill at the discovery of one of the best-loved writers of our time.
Collapse