This one was mostly a flashback to Eren, Mikasa & Armin's training. The anime does it chronologically. I was hoping the manga wasn't going to do it at all because that was the part that bored me right out of the anime and I didn't come back until several episodes later.

Honestly, it's not that much more exciting here. The story does however open with Armin getting thru to Titan-Eren and he seals the gate winning the first human victory over the Titans. Oh and Levi shows up which that made me happy (Yes, naturally I love the slightly psychopathic guy with the tragic back story. That is MY character, always).

Anyhow back to the flashback, we get to see boot camp but frankly I've seen so many bootcamps that I can't even think what it would take to make me interested in one. Yes we do get to know many of the characters, including 'potato girl' Sasha, Connie and several of the others. The tension here comes when Eren can not master the vertical manuevering gear. Mikasa is top of the class. Even hapless Armin can do it. Eren is crushed because he knows he'll be sent to the mines or farms or something. He does manage it with a twist.

Then there's Annie who kicks pretty much everyone's butt in hand to hand (I DO like that two of the strongest characters are women). Eren wants to learn from here but he's also getting frustrated with this system. The best and brightest get the first pick of assignments and naturally most of them want to go be king's guards in the safest part of the world, the center most walled ring. So those fighting the Titans are second tier or worse and he thinks this is stupid (he's not wrong).

The last bit is another good look at the main characters as they fight mock titans in a rainy forest, delineating their strengths and weaknesses. But it ends in misery with the death of several characters we got to know before flashing back to the present where a confused and now human-Eren is being held prisoner and may be put to death except for the fact that the survey corps (which go outside the walls into Titan land) and its leaders Erwin and Levi want Eren to use both as a weapon and to get back to his father's lab to see what Dr. Yeager knew about the titans. This suits Eren fine.

This one wasn't that engaging really because I don't really need to see how someone trained unless it really adds to the story (and usually it doesn't). I wish someone would teach him to draw arms. I draw arms better than this and I can't draw. It's very distracting.

Book 5: Three to Get Deadly by Janet Evanovich

3rd book in the Stephanie Plum mystery series. I have a crush on Joe Morelli. I am such a girl for falling for the bad boy, but Stephanie is right there with me. It's kind of funny that everyone in Trenton, NJ, seems to carry concealed weaponry. It's pretty hysterical when you have 70 and 80 year olds asking about what you are packing. I think I like this one best so far. Now I'm on to number 4.

The Icove Case seems to never be over for Lt. Eve Dallas, even though the case was closed. The book written on the clones and their creator has spawned a movie, being shot in New York. Of course, things don’t go well – the actress playing Officer Peabody is a miserable human being who is found murdered during a rare dinner with both the Hollywood contingent and the New Yorkers who inspired the movie. Dallas has to sort out all the movie glam and glitter from the facts, only to find a killer that has escaped notice for over 40 years.

The crime scene is so horrific even seasoned Lieutenant Eve Dallas is shocked – a neighborhood bar is covered in blood and gore from when its patrons started to attack each other until most were dead. The tox screen shows a nasty mix of hallucinogenics and other drugs in their system, likely something they breathed in. Dallas has to move fast to investigate it – something like this tends to be an act of terrorism, which often is repeated for impact and also creates a path for the federal government to take over her investigation. But it isn’t until Roarke’s majordomo, Summerset, mentions two similar attacks during the Urban Wars that Eve really gets the pieces of the puzzle put together. Always a joy to read, for the criminal case, and for the science fiction world built, but also for the people; this book had some lovely moments in the Roarke home that we don’t see often.

In 1945, a strange new craze for Truth Tellers is sweeping the kids of small-town America. The Fifth Doctor and Nyssa soon arrive to investigate the phenomenon, only to discover that the actual truth behind the Truth Tellers is far more sinister than anyone could have imagined .. - synopsis from UK publisher's website.

While this was quite a fun story it did feel as if the The Doctor and Nyssa were minor characters. As a result I didn't really feel that the writer was that into the series or the Sixth Doctor. So while entertaining enough for a short read it wasn't the best of this anniversary series. 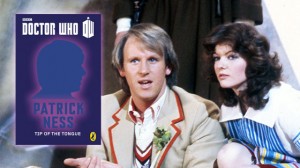 The Fifth Doctor and Nyssa

A wedding on the planet Koturia turns out to be a far more dangerous proposition than the Sixth Doctor and Peri ever expected. It marks the return of a formidable old foe whose genius matches the Doctor’s. Can the Doctor outwit this villain, save Peri and stop the wedding in time? - synopsis from UK publisher's website.

I didn't see many of the episodes featuring the Sixth Doctor though from what I recalled coupled with a few specials last year, Mead did an excellent job with this tale. The Doctor and Peri were central to the story and there was a sprinkling of humour. I enjoyed it very much and again it provided a fun break over tea time. 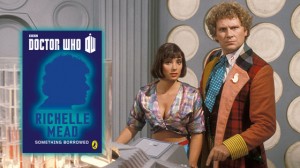 The Sixth Doctor and Peri.

In his fourth appearance in a Dan Brown novel, the protagonist Robert Langdon wakes up in a Florence hospital, with a head wound and no recollection of how he got there.

This sets off the usual race against time and set of cryptic clues, as seen in previous books in the series, most notably "The Da Vinci Code". This time, the clues relate to the Inferno from Dante's Divine Comedy, which is eventually linked to a conspiracy aiming to reduce the world's population.

While Dan Brown is quite impressive at writing thrillers aimed at intellectuals, I didn't think this was a great book, perhaps not surprisingly as the formula for the Robert Langdon novels is starting to feel repetitive. I remember getting annoyed that at times Langdon's knowledge of the Inferno seemed a bit patchy, and there was at last one error (being pernickety, he said the heretics get sent to the seventh circle of Hell - it's actually the sixth).

The other main problem I had was that about half the book seems to be chase sequences, usually with Langdon racing away from yet another set of adversaries. Also, while Dan Brown gives detailed and vivid depictions of all the places his characters visit, I started to feel that these were just to pad the story out a bit, and it started feeling like it was stretched out a bit.

Also, there was the occasional and sudden switching of points of view, that didn't seem to fit well - for example, describing an escape from the sewers from how it is perceived by a bystander. Most of the characters it switches to seem to be completely anonymous, and personally I think trying to get into a character's head without even telling us their name is a bad idea in terms of storytelling.

The book had some good points; it kept me on my toes about who was on whose side, and had one completely unexpected plot twist that showed a lot of events from a different angle, but there was plenty of stuff I didn't like. It was interesting that the plot veered into science fiction territory with its references to a man-made plague. However, the final few chapters just got way too talky for my liking.

Overall, not the best Dan Brown book I've read, but it inspired me to start reading The Divine Comedy again.