More like 2.5 stars thanks for confusing fight scenes, needless up-skirt shots (really, mangakas you need to stop that, especially if you're female. It's a Goth-Loli book, just who are the panty shots for?) and a quasi-would-be rape scene though at least that was a villain and not a would-be boyfriend like we sometimes get.

Mizeria (more clumsy and innocent and not as good with her powers) and Clarissa (cold, haughty and arrogant) are sisters, Harmonizers. They can affect the harmonies of the world and make them whole again. They can also open and close the Doors of Chaos which keep the Nocturnals (demon-like creatures) out of the Diurnal world. Clarissa is the opener and Mizeria the closing key. They've lived their whole life in the Royal gardens trained by Rikter.

On their 17th birthdays, their coming of age ceremony, all is going well until Rikter lets in some Nocturnals and kidnaps Clarissa. He meant to take Mizeria as well but is stopped by a strange warrior, Zelfa. He spirits Mizeria away to the Jishouin, an organization that maintains the closed doors (though they seem to be Nocturnals themselves or something called Dischords which disrupt the harmonies of life).

Mizeria thinks she's being kidnapped and nearly is by the Ansance (see above would be rapist) who is working with Rikter. Zelfa, The Flowing Elegance and the Ash Doll save her and take her to the leader of the Jishouin who explains she needs to close the doors her sister is opening. Confused, Mizeria agrees because she wants her sister and Rikter back.

While it had an interesting storyline it does get muddled here and there. The art is beautifully detailed and yet the faces sometimes look so doll-like it's hard to tell one from the other. I know this one only ended up two volumes long, most likely through mismanagement from Tokyo Pop.(They had a habit of shotgunning manga series out onto the shelf a dozen or so at a time then stopping them by volume 2 if they didn't sell well instead releasing a few at a time and letting them find their market).


This is where the series leaves off, unfortunately. I'm not sure what it was a victim of: Tokyo Pop's insistence on only putting out two volumes and cutting it off if it didn't make enough sales or that practice putting TP out of business. Either way, had this continued I'm not sure I would have followed. It's more of a 2.5 rating for me. I thought the storyline was interesting but there are some things that really bothered me, even more so because the mangaka is a woman.

Let me talk about the art first since this is where I was annoyed. Yes, the art is gorgeous, highly detailed Goth-Loli style. On the other hand, half the time I couldn't tell one character from the other especially since Mizeria changes hair color and the Flowing Elegance guardian has multiple shapes. I could live with that even though it made fight scenes difficult. What annoys me as it often does is the objectification for no good reason of the female characters. The part where Mizeria falls in the river and wakes up naked except for her lacy pants could at least be put down to them hanging up her clothing to dry but why the heck is Giselle, her rescuer in nothing but panties and garters and fishnets? She was wet too? There are a large number of bathing scenes and dressing scenes to have the girls all running around in panties and nothing else (and there are no similar half-robed male scenes to balance it out). Heck half the time Giselle and Mizeria are fighting in nothing but their lacy panties complete with camel toes. It's bad enough when male mangakas do this but when the ladies do it too, it drives me nuts especially when there is no need for it.

The storyline is at least interesting. Mizeria and Zelfa (what a hideous name. Almost all the names in this are gutteral and/or clumsy plays on words at least in English so we can maybe blame that on translation) are trying to rescue her sister, Clarissa from Rikter and Mizeria wants to know why Rikter is "forcing" Clarissa to open the doors of chaos (Clarissa is the opening key, Mizeria the closing key). She and her guardians end up in what looks like Venice during carnivale and Mizeria is knocked into a river (she can't swim) while Zelfa fights Rikter. We learn that something happened 17 years ago just before the sisters were born, right before the nearly two decades of peace started. It has Zelfa and Rikter at odds since and Rikter calls Zelfa a monster because even if hacked apart he heals immediately and can not die (Rikter we're to assume is much the same). Zelfa gets his butt handed to him and Rikter is quick to taunt him.

While Mizeria has been rescued by Giselle (who does the booby squeeze thing to her.That's another thing I'm not sure I get. Women generally don't go squeezing stranger's boobs regardless of orientation), and is looking for Clarissa, we see Clarissa being...confusing.

She whines about being captive but at the same time she seems to be enjoying herself. She flutters between not caring about the people who are dying as she opens the doors for the demons beyond and wanting to stop Rikter before he kills again. She makes no real sense as a character yet and sadly never will. Amazon claims there's a French edition (listing for insane amounts of money for manga which I see sometimes for things I know never came out) for volume three but Goodreads doesn't list it. In fact the mangaka doesn't seem to have done anything but this. It had at least an interesting story line but it was only partially developed.The cover art is absolutely beautiful.

This incredible version of the Peter Pan story absolutely swept me off my feet. Peter has been taking the lost, the abandoned, the runaway children, not too old, not too young, through the mist to Avalon. His band of lost children have been training and fighting the Flesh-Eaters, a band of men who landed on Avalon centuries ago. Their ways, antithetic to the magic of those who inhabit Avalon, infect the land, destroying the idyllic island. Peter knows the final battle must come soon. But not all the children he takes are happy to be there once they know the situation. And the magic of the land can warp those who do not belong there. Along with a brilliant story, Brom also has some beautiful illustrations at the beginning of chapters, along with some color plates in the center of the book. I’m amazed by Brom’s take on classic fairy tales and fantasy legends. As with the prior book I read of his (Krampus: The Yule Lord), he lists his sources and how they play into the final work. Highly recommended for those with a love of fantasy.

Tara Abernathy was cast out of the Hidden School, but they at least graduated her in the art of the Craft, in the magical arts that mortals went to war with the gods to study – and won. When she’s offered a job with an international necromantic firm, she finds herself in an adventure. She travels to the city of Alt Coulumb, whose god, Kos, has died. Most gods had died in the war, including the city’s former goddess and Kos’ love, Seril. When she died, they resurrected her into a fraction of her former self, and she served the city as Justice. Tara must argue in court for the form that Kos would be resurrected in order to fulfill his duties to the city, the fire that powered the city. Of course, nothing is quite as it seems, and Tara ends up facing her former professor in court, the arrogant practitioner that had previously enslaved her mind. The magic system and mythology is wonderfully complex, and the characters are well-rounded, making this an enchanting read.

Thousands of years ago, Time Lords built a Prison for the Kin. They made it utterly impregnable and unreachable. As long as Time Lords existed, the Kin would be trapped forever and the universe would be safe. They had planned for everything . . . everything, that is, other than the Time War and the fall of Gallifrey. Now the Kin are free again and there's only one Time Lord left in the universe who can stop them! - synopsis from UK publisher's website.

In this series of e-shorts released monthly in 2013 to celebrate the 50th Anniversary they certainly saved the best for last though Neil Gaiman does have the advantage of having written two scripts for the Eleventh Doctor so knows his Doctor well and thus contributed to the canon.

This was an elegant and exciting story. Just superb with a powerful plot that could easily be translated to the screen. 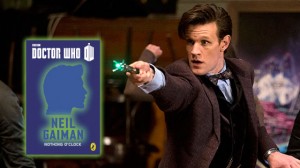 Holly Black was asked to write this story of the Twelfth Doctor before Series Eight had started and had to rely upon scripts with some parts redacted. She chose to set this story in between Episodes One and Two of Season Eight and explains where the Doctor went for the coffee he presented to Clara. Far in the future coffee is roasted at the Intergalactic Coffee Roasting Station (ICRS, pronounced ICARUS). While there the Doctor turns detective when a series of murders occur.

This story did remind me of Charlie Higson's The Beast of Babylon and Holly herself said she had been inspired by that story. Again no spoilers but this relates to the nature of the temporary companion. The story is also dotted with alien species that have appeared throughout the classic and more recent series. At least those who would enjoy coffee.

Finding out in retrospect that Holly Black had written this story without seeing Peter Capaldi in the role did explain a lot as I did not feel that she portrayed the Twelfth Doctor well. On top of this I felt the story itself was rather lack-lustre. So while it was nice to have the collection rounded out this was disappointing. 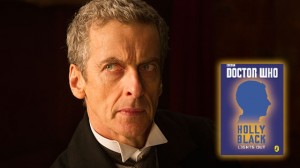